It’s no secret that exploring the Loch Lomond and The Trossachs National Park is a passion of mine. The region offers something for everyone to explore, whether it is water, woods, wilderness or wildlife. Even thought I have been making the most of the Park for ten years there are still many mountains to climb, hidden sights to enjoy, and creatures to encounter, so it is particularly exciting when I discover something new.

Over Christmas, the wet and windy weather – remnants of Storm Barbara – was pretty miserable, and scuppered much of the exploring I had planned over the festive holidays. It wasn’t until the 28th that I finally got outside to stretch my legs and burn off some Christmas calories.

An afternoon walk up the flank of Ben Bowie, my local hill, is always a great energiser. The route passes through fields, woods and moors so is continually interesting through the seasons. On the way up I saw heron, a buzzard.. and a bird of prey that I couldn’t quite identify. It had a classic raptor appearance, but didn’t seem to be a buzzard. I watched it soar over the plantation, wishing that I had brought some binoculars. As it soared lower down the hillside, I got a glimpse of a white rump and knew that this was characteristic of only one bird of prey – a hen harrier.

I know enough about the differences between the sexes to also recognise this as a female – the male is greyish with black wing tips as well as the white rump. Despite many forays into nearby glens hoping to see these birds, this was my first time seeing a hen harrier. I almost forgot to take some reference photographs. I had only a few seconds before it dropped below the treeline and disappeared for good: these were the best I could manage in poor light with cold hands! 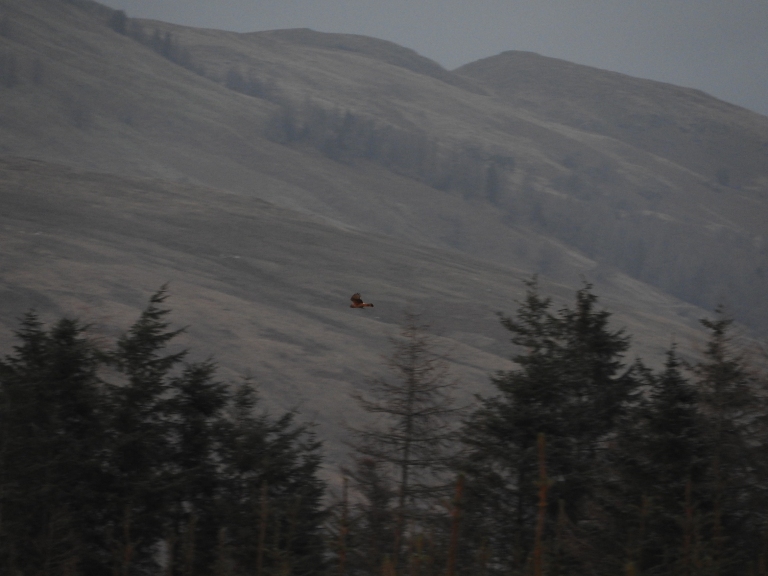 I waited a while longer but the bird did not come back into view. The short winter day was catching up to me, and so I descended back down the hill toward home I was treated to a great view of the Clyde estuary, across to the setting sun behind the hills above Greenock and Inverclyde.

A few days later, as my holidays drew to an end and my return to work was imminent, I enjoyed a second chance encounter with a hen harrier – this time a male – on the 2nd January. Encouraged by the sighting of the female, I took a drive along Glen Fruin (this time armed with binoculars). Glen Fruin is one of three local glens (along with Glen Luss and Glen Douglas) which run adjacent to the west bank of Loch Lomond. All are classic Scottish glens: fertile valleys spreading either side of a watercourse, rising steeply either side to hills and mountains. The mix of farmland, riparian, heath and hillside terrains makes the glens ideal for spotting wildlife of all sorts.

Hen harriers are known to be nesting on the hillsides in or around Glen Fruin, and were featured in this location on the UK Channel 5 series Loch Lomond: A Year In The Wild.

Only a short way into the Glen, I spotted a stunning male harrier over fields on the left, before it passed overhead and quartered the fields on the right. It dipped up and down out of sight a number of times, then did not return. I really couldn’t believe my luck as I had been here so many times before. I was unable to take any photographs sadly, but once spotted the male of this species is unmistakable for anything else and I was afraid to take my eyes away from it.

I lingered in the Glen for a while longer. A vocal buzzard called from the river. A kestrel passed overhead and hovered over the field. The hen harrier didn’t return, but I will definitely be back to look again for these magnificent and rare birds.